Life is indeed a mystery. Thankfully. Imagine knowing our destiny in advance, knowing the ‘correct’ paths to take, people to meet? It would be mind numbingly mundane. Like life, Morocco is a total mystery to me at first; a rabid dance of history and cultures, the merging of Africa, Asia and Europe, a celebration of culture in every interaction, each transaction.

Arriving in Tangier, I ride out of the ferry’s arrival compound, after an hour of customs negotiations and passport stamping, the taste of dust and spice simultaneously merged, coating both myself and possessions in Morocco itself. For some reason, moto’s are promoted to the front of the line of the many cars who had also just departed the ferry. Within a minute, a local guide, often referred to, mostly derogatorily, as touts, had attached himself to me, eager to show me his friend’s guesthouse and every other connection he had made in Tangier over the years. I succumbed fairly easily. I know the adventure is in finding things oneself, but that can be such a westerner need, to ‘discover’ a place, even tho, as is the case here, there already exists an obviously rich history of discovery, settlement and movement.

Off we went, him holding my large backpack and guitar, each formerly strapped to the pillion seat, outstretched in each hand, helmetless, as we rode through the crowded, colourful streets, through the Grand Souk and up to Hotel Hollanda. A very simple place, more a hostel than a hotel, with really friendly people working there, and an off street fenced area to keep the bike.

My week in Tangier was craziness personified. I had begun telling people about needing to sell the moto, and so Charif, the guide who had snagged me at the port, began to bring people around to have a look.

I have learnt many lessons while here. One of my favourite experiences of Morocco has been the realisation that for many, every personal interaction holds the possibility of business. This is not to say that Moroccans are obsessed with business and, as you may read in travel guides and blogs, that they are all rip off merchants waiting to seize on your moment of weakness or carelessness. Not in my experience anyway. Like any place, anywhere, there are of course people who live this way, but the majority of people I have met just recognise that business is part of life, and that by holding oneself in a respectful manner, acting with integrity, one can bridge these worlds quite easily.

Charif was the just wrong man to have help in selling the moto. He just wasn’t connected this way, and so brought a procession of hustlers and sharks to the hotel to look the bike over, make up issues with it, such as cracks in the frame that were actually just original weld marks, and then make incredibly low offers.

One man that I did meet, whose name was also Charif, is the manager of a Nomade’s Cooperative, selling rugs, clothes, jewellery and all kinds of craft for his nomade group living in the Western Sahara, A deliberate man, seemingly overflowing with integrity, he was interested in the moto but wanted to negotiate proper style, through meandering conversation, pots of atai [Moroccan mint and green tea], and while looking over the products in his shop. He was up front about not having a lot of money, but being able to offer some money as well as rugs, clothes and other items from the shop. I was up front about wanting to sell the bike for a decent amount, but also that who I sold it to was equally important, as it included helmet, jacket, GPS, tools, spare parts, panniers and top box. I wanted someone to buy the bike who would use it themself and appreciate the good deal and great quality of the motor and running gear.

But, it was not to be. Charif had to leave to return to the desert, and it was way too early to settle on a deal. After a week in Tangier, mostly spent walking the town, enjoying many hours of people watching in the Grand Souk [marketplace], cups of atai and coffee at the Rif Cinema [a fantastic old cinema, recently renovated and able to turn projectors out into the square to accommodate thousands of viewers, for larger events], wandering the labyrinthian medina and, of course, trying to sell the moto, it was time for Casablanca, the big smoke. 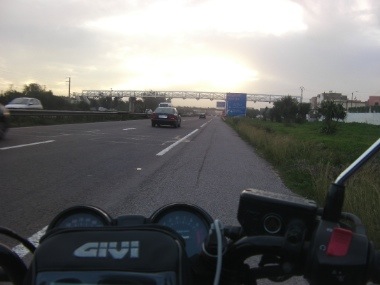 It’s hard to describe that first impression upon riding into the city. The ride there was fantastic, beautiful scenery, mostly along the west coast and the shores of the Atlantic, regularly waving at kids jumping up and down on the side of the highway as I rode by. In fact, there were people right along the highway, having picnics under shady trees, working plucking spinach leaves from random patches, or just watching the traffic go by and occasionally waving. Such a stark contrast from the usual barrenness of highways everywhere. But Casablanca was happening. 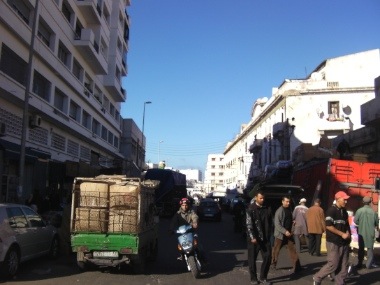 People everywhere, the streets constantly full, morning to night, taxis, regular cars, scooters, motos, bicycles, carts and pedestrians all weaving their way in and out of each other, anticipating the other’s movements, pushing for that extra inch of space. If you don’t push here, you will never get anywhere and despite the near constant din of vehicle horns, I did not see any real issues of road rage or anger. There is an understanding that exists, which seems, to me, to be that we are all needing to get somewhere. While people push and push, they also let others in, or slow down for a pedestrian. The street crossings and lane markings mean absolutely nothing. The lanes become where the vehicle’s dictate and the first row or two at traffic lights are unable to see the lights themselves so rely on the blaring horns of people lined up behind them to advise that the light has turned green. 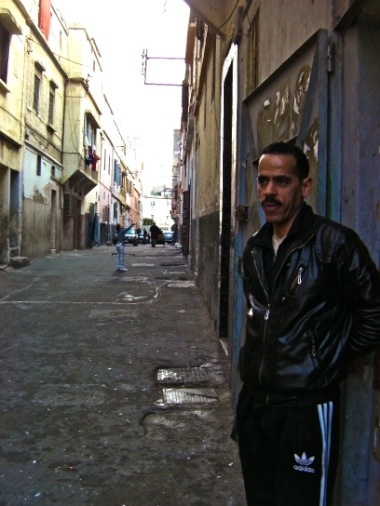 At first, after arriving at the hotel I had booked, I decided no more riding. It felt too dangerous, with needing to sell the bike in a ridable condition, a risk I did not want to take. But I loosened up, and by the time I left I really enjoyed riding through the city. To be truthful, this style of driving and traffic ‘management’ is my preference. It puts the onus on drivers to communicate, to be aware of each other and to be confident and forceful in getting what you need. In the west, where traffic is so orderly and dictated, road rage stems from people’s need to feel empowered, to cling to the rules because they are supposedly the benchmark of respect for law and order and to take infringements by others ‘inflicted’ upon them to be personal attacks on their freedom and a sign of disrespect. 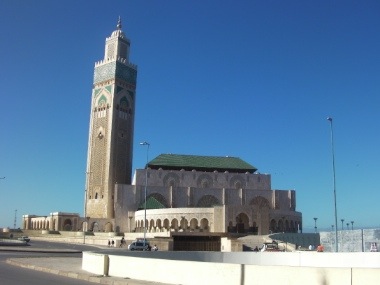 One major problem in Casablanca, tho, is that there is barely any public transport. Meaning that everyone drives. The streets during the day are constantly full, jammed up, horns blaring, so that it takes half an hour just to get to the outskirts of the inner city and to calmer roads. The other problem is that the taxis are so poorly maintained and the drivers, generally, drive so frantically, that it can be pretty scary. Then again, I did not see any accidents in my time there, tho I did notice that almost every car had some kind of scratch or dent, even newer ones.

I stayed in Hotel Transatlantique, located in Mariif, quote close to the port and to the main markets and just outside of the more touristy areas that feature the Sheraton and other such hotels, and far away from The Corniche, the boulevard that runs along the ocean front, which is a wealthy tourist haven. Truthfully, I picked the hotel quite randomly, as I mostly do, and because it was well priced at $30 per night. The place seemed to appear quite lavish, but was operated by such a comical range of staff that I can only compare it to Fawlty Towers but magnified. Every day there were arguments, constantly, between staff, between owners or managers and staff, between some of the many prostitutes operating out of the hotel’s nightclub and regularly staying the night with customers, or between staff and random local people. But, of course, as is the way with countries like Morocco and Sri Lanka, that operate within an old style of bureaucracy and administration, they tried to convey some sort of professionalism through their attire and formal language. The whole experience at this place was hilarious, every day some sort of incident happening just so far from any of my life experiences. I became referred to as Mr Steph.

Casablanca was a lot of fun. I met so many local people, had crazy adventures through the medina, around the markets and along the ocean front and played bball regularly with a group of young crew who i eventually left my ball with.

Essaouira was another beautiful town. More tourist oriented and with a much more laid back feel to Casa, the town revolves around the Medina and marketplace and the tourism that is generated by its beautiful location and friendly people. I found a great artisan support centre there in the Medina, full of small workshop spaces and shops selling locally made creations. And a great streetball scene with quality play, mostly 17 to 20 year old guys going at it each afternoon on the beach front court. 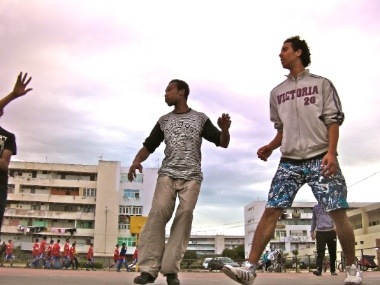 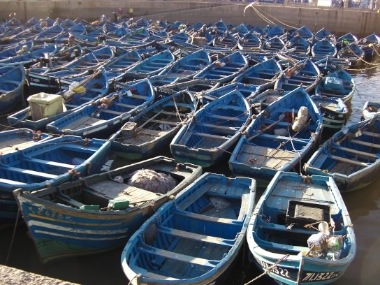 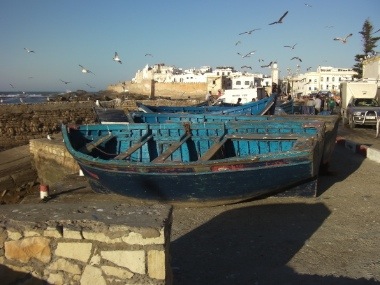 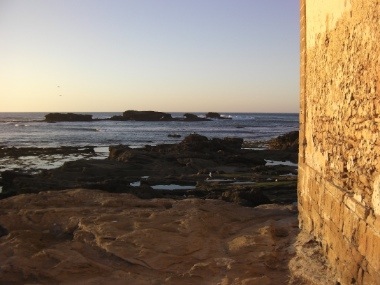 This trip has revealed many things to me, one being that, to me, “figuring” anything out is problematic. Not the process, or the end result, just the whole concept of ‘figuring’ something out, being absolute about a perception, a theory, a belief. Not to suggest that having ideas about something, concepts to thrash around with others, to dwell upon, to think through, isn’t an important and vital part of life, but more as a process than an end point. It was interesting, while in Morocco, talking with people of islamic faith about their practice of religion. People here seemed more open to discussing religion as part of everyday life. To me, and this is just my personal experience, it seems that there are very deeply entrenched gender issues here, as obviously there are also in catholic, buddhist and every other country i’ve experienced, just to differing degrees and revealing itself in different ways, sometimes more subtle than others…as in those countries, these sorts of issues are often such an intrinsic part of the language and so accepted as the norm, seemingly sourced from religious texts and the way in which people attribute these words directly to God, and therefore deem them unchallengeable. I just can not understand how a God, a power assumed to be greater than any on Earth and attributed with it’s design and creation, would not want human beings to challenge these teachings from thousands of years in our past. I don’t understand this concept of fear for God, and that not following the teachings will result in an afterlife of hell and fury. It just doesn’t make sense to me, not if we are talking about a God, a superior and advanced form of life. How can such an advanced being not want the creatures it has created to themselves advance and grow, to challenge previous thought and become more than their origins.

With such thoughts rattling around my head, now the plane begins its descent into Barcelona. A week here, part planning, part thesis writing, part adventures, then on to Sri Lanka for a new chapter.